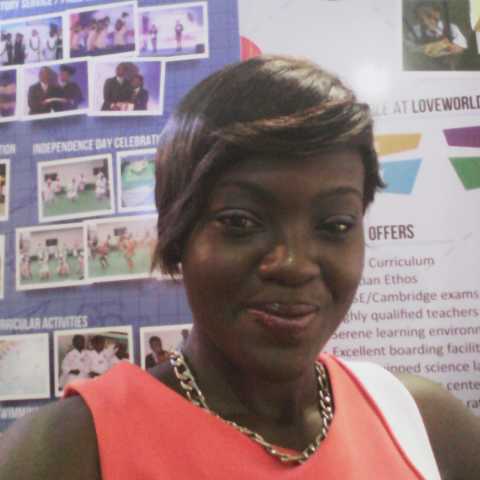 COUNT YOUR BLESSINGS, NAME THEM ONE BY ONE AND IT WILL SURPRISE YOU WHAT THE LORD HAS DONE "Offer Thanksgiving sacrifices, tell the world what He's done--sing it out!" - Psalms 107:22 (MSG). The Esteemed Chief Executive Officer and Director, LoveWorld Publishing Ministry, Pastor Yemisi Kudehinbu, along with the vibrantly dressed Staff members of the LoveWorld Publishing Ministry, grateful for all the mighty works the Lord had wrought in the Year of Spreading, danced forward at the 2016 Annual Staff Thanksgiving Service, with their Thanksgiving offerings to sing, and testify of what the Lord has done in the Year of Spreading. What a year! The Department was grateful- for the first time ever, in one ministry year, we developed well over 60 various new products ranging from Bibles to Children’s Books to Digital and Animated products, including the glorious launch of the life-changing Masterpiece on Mind Management; The Power of Your Mind, by our Man of God, Rev. Dr. Chris Oyakhilome early in the year, which has been translated into a record breaking 47 languages of which 8 translations are now published in Print and Electronic formats in the book’s first 8 months of release! This year alone, the Rhapsody Bible achieved 7 new translations and the publishing of 8 new Rhapsody Bibles. This accomplishment would have taken renowned Bible publishers 17 years to accomplish but WE DID IT in 1 ministry year. We also released the first of its kind Digital RORK TAB FOR CHILDREN, 3 Series of the ‘I Know Who I Am” Book, 11 Book Apps (on the RORK Tab) and so much more. Amongst other miraculous things, were the tremendous successes recorded, through outreaches, where over 1,000,000 Souls were won. The miracles kept rolling in and families spread as God added to us 7 bouncing baby boys and 3 bouncing baby girls! By the Power of God, through the spread of our publications, our Message has become a beacon to millions around the world; bringing light to millions, water to the weary; and quenching the thirst of many. So much to be thankful for in this Year of Spreading! #AppThursday #lwpm

The most basic Human right, is the right to hear the gospel...

LIFE LESSONS: Samson The Angel of God, at the request of Samson's father, prophesied who Samson would be, what he would do and HOW HE SHOULD CONDUCT HIMSELF TO FULFILL HIS DESTINY. Samson didn't do it. Lesson: God is at work in us to will and to do of His good pleasure, YET, we must work out our salvation with fear and trembling. #appThursday #YearOfSpreading #theCompassConference #NSS1V1 #ceAsaba #ceSapele #ceAgbor

We lift our voice in d Sanctuary! High Praises on our Lips! His Faithfulness is 4ever! His promises unbroken! Our God is Love! #thanksgiving

A smooth night cap with some of Pastor's Quotes: "Revelation without relationship produces rebellion". As a Child of God you must realize that you're on the winning side of prophecy; until you win it's not over yet". "What you see with the eyes of Faith is more real than what you see with your optical eyes". " If at the age of thirty you don't know what God had called you to do; you may never know". "As a Christian you ought to be less concerned about where God is bringing you out from, rather focus on where He's taking you".

Obama orders intelligence services to investigate possibility of cyber attack during 2016 election; will share the results with lawmakers and others, according to Home Security advisor Lisa Monaco; claimed cyber attacks have been present in elections since 2008. Source: http://mobile.reuters.com/article/idUSKBN13Y1U7

FAITH PROCLAMATIONS OF HEALING & HEALTH The life of my body is no longer of blood, but by the Spirit of God! It is not possible for my blood to be infected because that same Spirit causes divine vitalization in my body! No infection can stay in my blood! No tumor can successfully grow in my body!  It makes no difference how the sickness tries to get in, the life of God in me burns up every trace of sickness! I am divinely connected to an endless supply of health! I live each day of my life, full of life, and invigorated by the power of the Holy Ghost at work in me! Nothing can put me down because I am more than a conqueror! Glory! Glory!! Hallelujah! REGISTRATION FOR THE AUTUMN & SUMMER SESSION 2017 has commenced. REGISTER NOW on the Healing School mobile app or at www.enterthehealingschool.org FOLLOW the Healing School Superuser on Kingschat, download the Healing School mobile app or visit www.enterthehealingschool.org for live updates. #healingtothenations #thankyoudearpartners #autumnsession2017 #summersession2017

To some its magic...

Happy wedding anniversary to a very special. As individuals and as a team, your value to our Nation continues to soar. I love you dearly.

#Dec7 loading #BLWDayofService Reports #Celebratingourfather Brother Joe & Sinach Egbu visited inmates in Prison and kids in an Orphanage in commemoration of the birthday of our dear man of God. Ministering, she told them, "the greatest prison anyone can be in is the prison of the spirit and the mind. If the Son of God sets you free, you are free indeed" 20 people responded and got born again. Thank you #PastorChris for inspiring us to be an inspiration, she says Keep following this SuperUser for updates

Flame B profile on KingsChat Web

The BLW UK Int'l Office Roll Up Their Sleeves The Staff of the BLW UK International Office in continuation of their BLW International Day of Service in honour of our Man of God Rev (Dr.) Chris Oyakhilome's birthday, set out to give gifts and have an activity fun-filled day with the residents of Ebury Court Care Home in Romford, Essex. The faces of the residents lit up as they received their gifts which comprised of household essentials and gladly got involved in dancing and singing activities. The liquid love shown to the residents was tangible even as the members of staff prayed for them and this resulted in profuse thanks from the residents to God. The management, staff and residents were enraptured with so much joy at the open display of God's love and expressed their appreciation and gratitude to our Father Rev (Dr.) Chris Oyakhilome. We are thankful to our man of God for this glorious opportunity to display the character of God's Spirit in the lives of many. #rollupyoursleeves #blwintldayofservice #offer7 #dec7 ____________________________________ #BLWIntlUK Follow the BLW UK International Office SuperUser account on KingsChat.

my teacher said something against the word of God of course I stood up & told her about Jesus In front of 200 student!Now I'm in the papers